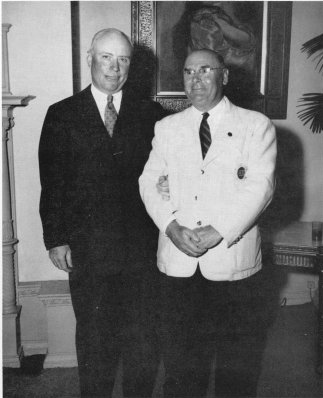 1930 was the year Bobby Jones won the Grand Slam: the U.S. Open, U.S. Amateur, British Open and British Amateur, and then he retired. Seventeen-year-old Ben Hogan first registered as a professional in 1930 at the Texas Open. And on October 6, 1930 in Greensboro NC at The Sedgefield Club, the organization that would become Southern Seniors Golf Association was founded.

Howard G. Phillips of Pinehurst, Homer G. Wheeler and John Heller of Greensboro, and Walter Buckner of Richmond came up with "The Idea" for The Mid-Southern Seniors Golf Association: For all of this group, then, who in the parlance of the links may be classified as ‘old timers’ - who are possibly beginning to find the pace of the ‘infant terribles’ a little too stiff in many of the existing tournaments - who, in fact, have not ceased to yearn for the return of those annual meets of good fellowship where the old familiar gang one again steps up to the tee - for all of these is the present seniors’ battle being sponsored and encouraged with the hope that it will serve a real end and fulfill a genuine need.

An informal set of By-Laws was established but rules and regulations were few and simple – there was no initiation fee and the annual dues were $1.00. It was believed that this would be sufficient to pay expenses of stationery, postage and other secretarial items.

The initial membership of thirty-five realized that for this fledgling senior golf association to get off the ground and prosper they must increase the membership and that was undoubtedly a prime factor in opening with no initiation fee and minimum dues. This $1.00 annual dues remained for four years when, as the membership increased and expenses were greater, it was found necessary to increase this figure to $2.00 per year. With postage at 2 cents for letters and the famous old penny postcards which were freely used, it is apparent that they were dealing with real dollars.

The President and Secretary were instructed to endeavor to arrange six to eight one-day senior golf tournaments for the first year plus a two-day Big Tournament or Championship which was to be played every year at the Sedgefield Club. The first Championship Tournament was won by A.P. Bagby. The other tournaments were to be held at locations not too far distant, apparently meaning within an easy day’s drive of that section of North Carolina.

It is interesting that at all of the early meetings there were heated discussions of handicaps and it is apparent that hustlers’ existed in that day- have existed to this day- and will probably always be with us. They established an arbitrary rule of a maximum handicap of twenty-five and any time a member turned in four consecutive scores lower than seemed reasonable, this handicap was reduced to a figure that seemed appropriate. The expected howls materialized! 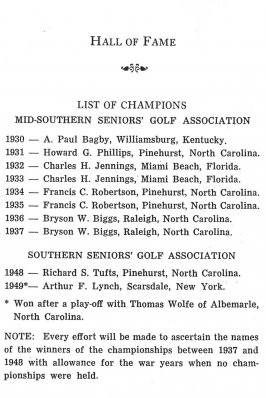 Soon Chester was on his way to Nashville and there he found Adolph Skinner later President of the Southern Seniors and member of an influential group of Western Seniors including Chick Evans. A call was put through to Joseph Dey Executive Secretary of the U.S.G.A. The next year, 1955, the U.S.G.A. sponsored the first National Senior Golf Championship, twenty-five years after the founding of Southern Seniors! 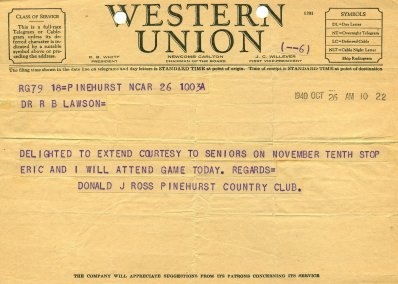 Invitation from Donald Ross to 1940 President Dr. R.B. Lawson for Southern Seniors to be his guests at Pinehurst.

Until the 1960s Southern Seniors had concentrated tournaments in the Carolinas, Virginia and Tennessee. As membership grew so did the choices of resorts and clubs. Regular tournaments were expanded to several days and Southern Seniors began to travel more extensively. Events were held in Las Vegas, Puerto Rico, and Hawaii. Membership in Southern Seniors was an opportunity to enjoy both golf competition and travel to first-class destinations.

Ladies participation also increased during this time with both ladies golf competition and more activities for social attendees. The Southern Seniors did not have an official Ladies Champion until 1972 when the Ruth Barker Memorial Trophy was established by her husband Richard B. Barker. Since then the Annual Ladies Match Play Championship has been held at the same time as the year-ending men’s Annual Championship. The first Lady Champion was Bunny McAlpine of Summit, N.J.

The tradition of regular visits to Sea Island, GA and Linville, NC also began in the 1970s. These outstanding resorts are so popular that they continue to be frequent hosts for our two individual match play championships. During this time, Southern Seniors earned a reputation for outstanding senior golf tournaments and came to be known as "The most respected name in Senior Amateur Golf".

By 1980, our Fiftieth year, there were a total of 4,457 Southern Seniors to date. The Association prospered from members’ enthusiasm for sharing their senior golf association with their friends. The Golden Anniversary was celebrated with the publication of Fifty Years On, the official history of Southern Seniors authored by Charles C. McGehee, 1983 President.

Roy W. Godley was President of Southern Seniors in 1982. His yearbook message spoke to the health benefits of golf: Psychologists tell us it is important to keep active interests which stimulate our emotional and physical being. Golf is the greatest provider of these elements. In every round most of our emotions come into play. There is joy, sadness, frustration, expectation, disappointment, and sometimes humiliation. They can all be a part of our mental well-being and the number of strokes most of us require takes care of our physical needs. After the round we reminisce, and there are always treasured memories of what we did, or almost did. 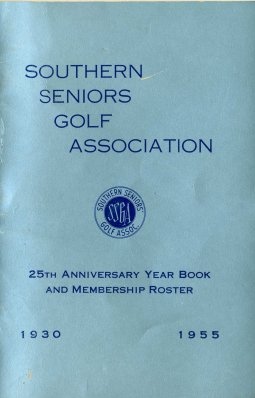 In 1994 Southern Seniors first recognized members who excelled in sponsoring new members. Under the leadership of President Ed Ingle the Eagle Society was formed to honor members who have sponsored twelve or more new members. Since December 1994 there have been 54 members inducted. Membership in the Eagle Society is one of the highest honors a Southern Seniors member can achieve. 1994 was also the first year a Grand Seniors championship division was formed as an option for members age 70 or better.

Henry Farmer, 1999 President, in his yearbook message posed the question What is Southern Seniors Golf Association? He answered Southern Seniors, as a group, love the game of golf and are winners in the game of life. In my opinion this is the reason we have such friendly, spirited competition in our golf tournaments.

In our Seventy-fifth year, 2005, Southern Seniors conducted seven tournaments including Hot Springs, VA, an old favorite, and a new trip to Williamsburg, VA. During the Annual Championship banquet the management of The Cloister provided a champagne toast for the members to celebrate. The entire group of 300 members and ladies raised a glass in unison to toast the Southern Seniors Diamond Anniversary.

In 2023, our 93rd year, the membership includes over 400 amateur senior golfers from 32 states and Canada. The Association is headquartered in Marietta, GA.